Why Durham Region Home Prices Will Continue to Rise

Posted on May 4, 2017 by John Owen
Posted in Durham Region, prices 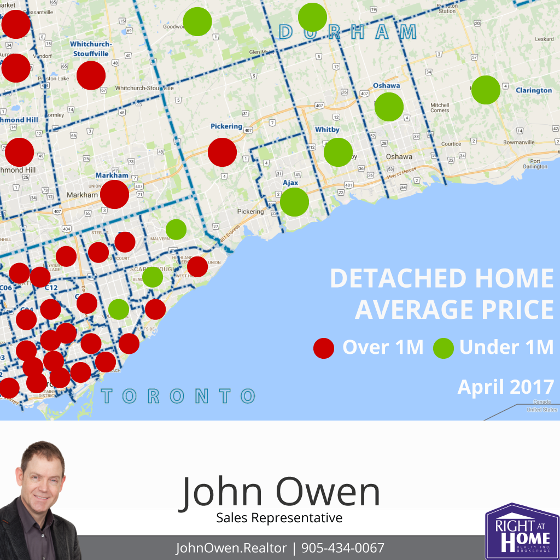 As the spring real estate market continues to unfold in Durham Region and the Greater Toronto Area, I get asked a lot if prices will continue to go up, or whether they will start to fall.

My take on the situation is that prices in Durham Region are going to continue to rise for the near term, as market factors and government intervention take effect on the local area.

The graphic above shows how detached homes in the east GTA are closing in on the million dollar mark. Why is that important?

The impact here is that you need a $200,000 down payment to buy a million dollar house, where you only need 75,000 to buy a house at 999,999. With the latter house, you can get mortgage insurance and can use a much smaller down payment.

The difference is huge at this price point, and it helps to explain the buying frenzy on detached homes that come in below the million dollar mark.

There are still detached homes in Toronto and York Region below the million dollar point, but in most areas, you simply don't get much for that price. Come east into Durham Region, and you get a much greater value - the further out from the city, the better the home for the money - generally speaking.

As prices in the Scarborough area start to eclipse the million dollar mark, buyers wanting detached homes are forced to look east. Just last month, there were 9 communities out of 11 with average prices below one million dollars. In April there were just 3.

Also, Pickering jumped over the million dollar mark for the first time, further restricting the number of communities in the group. Whitby is poised to join if things progress much further - in April the average detached home was $863K.

It's no secret that the 407 extension has made Durham Region more accessible for those in North Ajax, Whitby, Oshawa and Clarington. Add the expansion of GO train service and those in the city are finding Durham a viable choice for commuting.

Sales volume dropped in the GTA overall in April from last year. Volume actually increased in Durham Region - by 12.3%. It is interesting to see the differences in communities. Pickering's volume dropped 4.1% - and also jumped over the million dollar average. Ajax, Oshawa and Clarington increased by 18.8%, 15.7% and 26.5% respectively.

There are more listings out there, but they continue to get sold at a frenetic pace - just 7 days on the market overall in Durham.

It will be very interesting to see how things progress over the remainder of the coming season. My bet is that detached homes will continue their rise in east Durham, and at a pace far greater than the GTA.