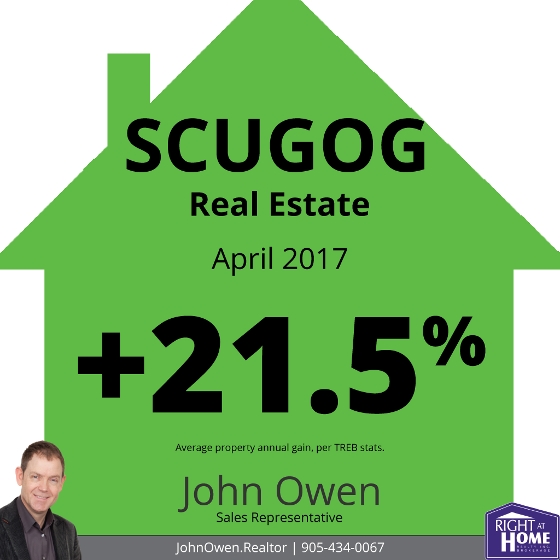 Scugog real estate is still rising, although at a reduced pace in April with a 21.5% average annual price increase on residential properties. The Toronto Real Estate Board's (TREB) latest market stats put the average property selling at $661,990 - up from last year's 544,746.

It is noteworthy that the smaller number of properties sold in Scugog versus other regions makes it more important to review the details of specific neighbourhoods when considering the value of homes in the current market.

Active listings were up slightly - 3.0%, which shows a little relief for buyers and our vastly depleted inventory.

The average detached home in Scugog sold for 677,474. This is almost the same as the overall average number, as there are relatively few other home types being sold in Scugog compared to the centres south of here. So few, in fact, that I typically won't report on them as a group.

The MLS Home Price Index helps to normalize the statistics, by adjusting sales statistics to represent typical homes within MLS areas.  When using these numbers, Scugog showed a composite annual gain of 29.94%, compared to the TREB average of 31.7%.

The average listing in Scugog spent 11 days on the market. The TREB average was 9 days. Again, given Scugog's market size, it is normal to be higher than the GTA average here, but this number is extremely low for the area.

The average listing sold for 103% of asking, demonstrating that demand is still quite strong, and an indication that there are still multiple offers happening on a substantial number of listings.