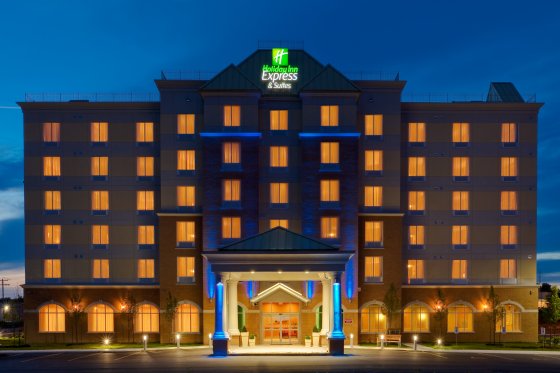 A new Holiday Inn Express Hotel and Convention Centre currently under construction in downtown Oshawa will provided a long awaited boost for the city in attracting visitors for both local businesses and events. Part of a long list of recent downtown Oshawa revitalization projects, it follows construction of the GM Centre, Courthouse facility and conversion of substantial brownfield space at Ritson Road North and Adelaide Avenue East to commercial development, including the recently opened Costco. The City of Oshawa had been seeking a developer to build a hotel and convention centre for some time, with virtually no hotel facilities in the downtown area.  A similar project fell through several years ago when the developer in the project ran into financial difficulties. The project is underway at the intersection of Simcoe Street North and Richmond Street East on a former municipal parking lot, and will be six storeys tall with 125 guest rooms, underground parking and convention space. The facility comes with plenty of financial incentives.  They consist of a building permit grant which the City will rebate $90,000 upon completion of the hotel, a $124,000 facade improvement grant and $2 million in City taxes over the first 13 years.  The City will effectively start making taxes on the property after year 13. Completion of the hotel is scheduled for late 2014.