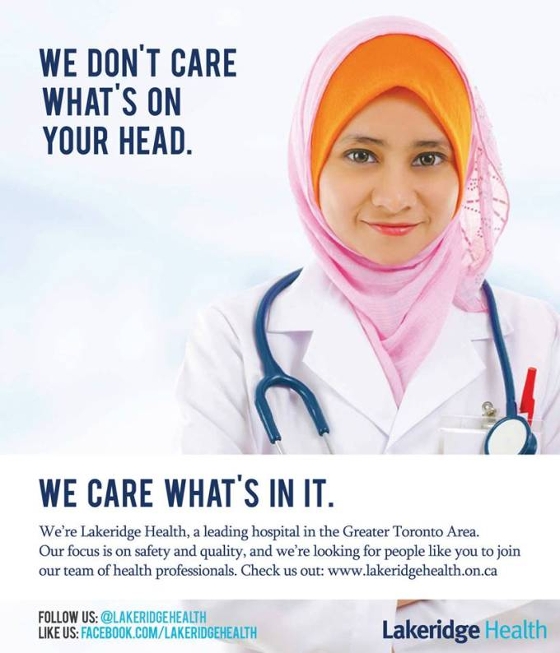 Durham Region's Lakeridge Health Hospital has attracted headlines nationwide with an advertising campaign targeting medical professionals and students in Quebec.  The campaign included ads in the McGill University student newsletter that tackles the controversial Quebec values charter announced this week by premier Pauline Marois. The announcement of the charter has stirred diversity and tolerance debates around the globe, and Lakeridge Health's recruitment ad has been met with a firestorm of responses from news outlets and social media, with a clear majority of comments supporting the cleverness of the campaign which tackles an arguably huge blunder by the province of Quebec following a similar embarrassment earlier this year when the Quebec Soccer Federation was forced to lift a ban of players wearing turbans on the field after a similar backlash worldwide, including Canadian and worldwide soccer federations (FIFA). I applaud Lakeridge Health's campaign.  It doesn't specifically mention anything regarding the Quebec government's policy shift directly, but it does do something that I find very heartwarming - it lets people know that what they look like or what they believe in doesn't matter - at all.  In a country that is made up of people from all corners of the globe, I find it refreshing to see a message that encourages inclusion, not repression.  The message is simple, and it could be interpreted to include things other than just religious expression, and should.  If someone wants to express their heritage or sexual orientation, that is their right too. Well done Lakeridge Health. You haven't just made a gesture to potential employees, you have done our community proud.