Under the Ontario government's plan to expand gaming in the province, the Ontario Lottery and Gaming Corporation (OLG) released a number of updates this week.

Included in the releases was a Request for Prequalifications (RFPQ) for companies to submit regarding casino construction and operation in the Greater Toronto Area and, specifically, the Ajax and Whitby area.  Under the OLG's plan for expansion, the area including Ajax, Whitby and Pickering is bundled into a gaming zone known as "Gaming Zone 3", which is part of a larger area called "Gaming Bundle 5", or the GTA Zone.  This bundle also includes Zone C2, where Woodbine Racetrack and Slots is located, and could potentially include Zone C8, where the Great Blue Heron Charity Casino is located.

Under the RFPQ, the OLG is asking companies to outline their capability (both operationally and financially) to build and operate both gaming and non-gaming (including entertainment and restaurant) facilities in the C2 and C3 zones (Woodbine area and Ajax, Whitby, Pickering area).  I have excluded Pickering from most of the article as Pickering Council has voted down the concept of hosting a gaming facility. 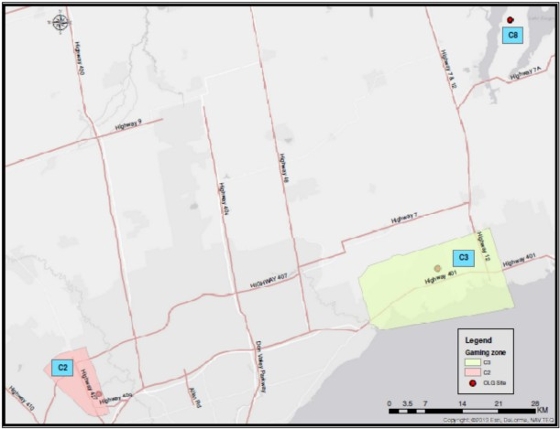 Some details uncovered in the RFPQ include the following:

The documents contain much more detail that I have summarized here, and I welcome your comments or questions below.