Posted on April 2, 2017 by John Owen
Posted in sales, Scugog 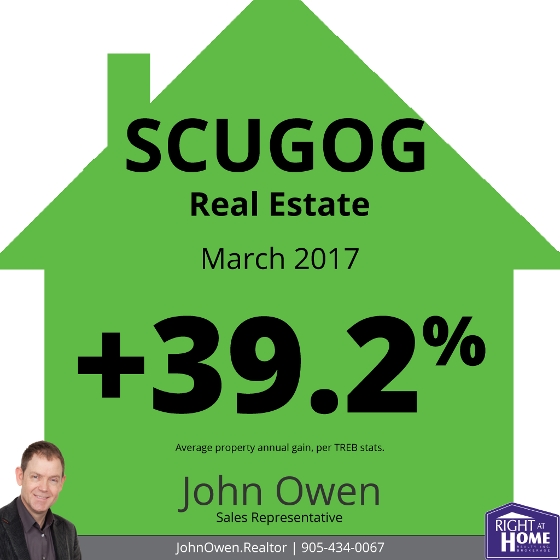 It is noteworthy that the smaller number of properties sold in Scugog versus other regions makes it more important to review the details of specific neighborhoods when considering the value of homes in the current market.

Active listings were down 35.2%, which shows a tremendously strained inventory that makes for incredible demand on the listings out there and resulting in bidding wars galore on well-prepared and marketed properties.

The average detached home in Scugog sold for 694,529. This is almost the same as the overall average number, as there are relatively few other home types being sold in Scugog compared to the centres south of here. So few, in fact, that I typically won't report on them as a group.

The MLS Home Price Index helps to normalize the statistics, by adjusting sales statistics to represent typical homes within MLS areas.  When using these numbers, Scugog showed a composite annual gain of 25.25%, compared to the TREB average of 28.59%.

The average listing in Scugog spent 19 days on the market. The TREB average was 10 days. Again, given Scugog's market size, it is normal to be higher than the GTA average here.

The average listing sold for 104% of asking, demonstrating that demand is still quite strong, and an indication that there are still multiple offers happening on a substantial number of listings.