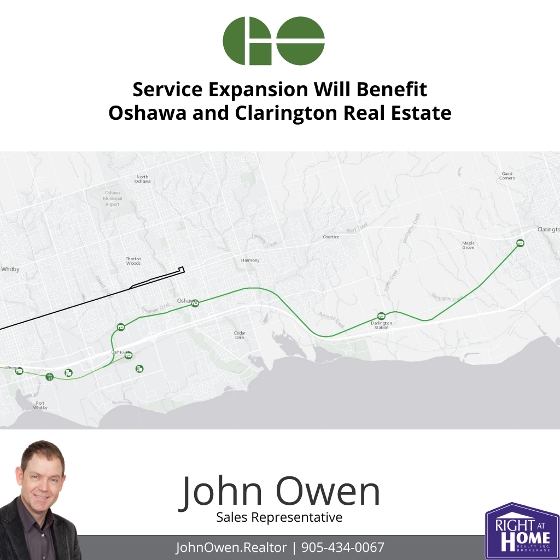 An announcement by the federal government today helps to cement the expansion of GO train service within the GTA.

The earmarking of $1.8 billion in infrastructure funding for Ontario transit overlaps funding of $13.5 billion that was already announced by the province. The provincial government has indicated that this new money will enable it to add more transit projects.

What is important for Durham residents, and those considering a move here is that GO train service will be expanding to 4 new stations in Oshawa and Clarington. Two of those stations will be in Oshawa, another near Courtice Road and the 401, and one in Bowmanville.

Service frequency is also slated to improve to 15-minute intervals, as well as service beyond rush hour times. This is good news for those working outside office hours, as well as traditional commuters. This is expected to be in place by 2024.

Further, the service is planning to electrify the train system, allowing for faster train speed. Ideally, this will contribute to shorten commute times for everyone using the system.

How it helps Clarington Real Estate

Having frequent, high-speed service makes Bowmanville and Courtice very attractive to those who may have limited their options to areas closer to the Toronto core.

What is of particular interest is the potential for more affordable housing options in close proximity to the GO line. In particular, there should be expanded development of condominium and apartment projects, as well as townhomes in south Courtice and Bowmanville.

What is even more exciting is the very real potential of areas in north Clarington to become viable options for people working in Toronto. With drive times to a GO station becoming reasonable, more people will consider these areas for existing and new homes in the midrange and luxury niches.

Take a look at market prices in Clarington and compare them to Stouffville and Aurora, and it becomes clear that there is a great disparity that has largely been due to commute times.

This project, along with the expansion of highway 407 and 418, will really help to level the field on travel times to Toronto.

How it Will Impact Oshawa Real Estate

Oshawa is poised to benefit from the GO expansion in a number of ways.

Most of the land surrounding the GO rail corridor is already developed, although some areas have been in stages of stagnation or decline for decades. In particular, the area surrounding the new Central Oshawa GO Station is one of Oshawa's most notoriously bad neighbourhoods

With a brand new GO station this area, as well as the areas from downtown Oshawa to Lake Ontario (Central, Vanier and Lakeview areas) will be poised for gentrification of residential and commercial properties and redevelopment of previously industrial parcels into high and medium-density residential projects.

There is also very good potential for the hospitality and retail sector in the immediate area as this area moves forward.

I would love to see something similar to the renewal in Toronto's distillery district here, making the area a true destination for locals and visitors.

Not only will the immediate vicinity benefit, but also those in north Oshawa will have faster access to the GO train system with 2 new stations.

The future for both Clarington and Oshawa is brighter with the expansion of GO train service, and the potential for reductions in vehicle traffic that it will provide.

It's an exciting time for Durham. I look forward to seeing the transformation continue.